The Augustinians arrived in Indonesia in 1542, thanks to a Spanish expedition and they “disembarked” on the island of West Papua in 1953, thanks to a Dutch Augustinian. The Vicariate of Papua was born in September 2013 and the Augustinian friars today are present in Senpi, Ayawasi, Sisweni, Aimas, Monokwari and Sorong.

Papua New Guinea, the island that ranks number two in size after Greenland, is to be found at the eastern edge of the Indonesian Archipelago and is part of Melanesia, the group of islands to the northwest of Australia and which extend as far as Fiji. The Papuans, of mixed ethnic origins, aboriginal and Indonesian, do not have any cultural ties with Southeast Asia. They are a Catholic minority in Indonesia (the most populous Islamic nation in the world), and they are very closely bound to their own tribal traditions. The dispute over the administration of Papua began in 1949 and the end of eastern Dutch colonies in Indonesia. Western Papua remained the only place to remain under Holland, which had categorically refused the possibility of consigning it to Jakarta, given the absence of political-cultural ties between the island and the rest of the Indonesian archipelago. In 1962, however, with the mediation of the United Nations, the New York Agreement was signed which led to the control of West Papua by Indonesia beginning in 1963. Since then there have been difficult periodic conflicts between the army and independent Papuan movements, but the “Papuan cause” is not at all near to a solution because of the very many economic ties to gas, lumber, palm oil, and, above all, the greatest deposits of gold and copper in the world, managed by the American company, Freeport; with the support of the Indonesian government. All of this wealth, however, has not brought with it any benefit to the Papuan population who live in conditions of poverty, isolation and discrimination. Amnesty International and Human Rights Watch have accused the Indonesian government of repeated violations of human rights and the Papuans have defined it as a true and definite genocide. In fifty years, the special Indonesian forces have slaughtered at least 100,000 Papuans, while the police terrorize the local population with abuses and violence.

The work of the Augustinians, therefore, is concentrated on instruction, health care, support for rural communities and, above all, a program for the protection of human rights. 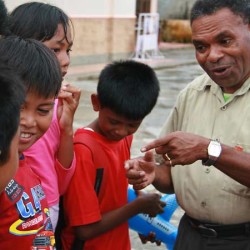 The goal of the project is to support the educational program of the Augustinian missionaries who oversee the construction and the furnishing of new classrooms, the enlarging of the residence for students and the continuance of educational activity begun in 2015.